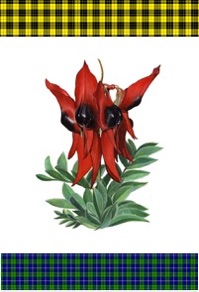 In earlier times Scottish families and small clans allied themselves to larger clans.  They did this because they felt it prudent to attach themselves to a more powerful neighbour who could offer them protection and security.  Such groups were called Septs of the Clan.  Septs associated with Clan MacLeod are listed below.

Some of these Septs undertook specialist activities within a clan.  The MacCrimmons for example, were the pipers to MacLeod of MacLeod (Chief of Harris and Dunvegan) for some three hundred years.  The Beatons (also Beton and Bethune) were Physicians, well known for their ‘natural’ treatments with the use of local herbs and other plants.  Even today, their skills are respected throughout Western Scotland and the Isles. 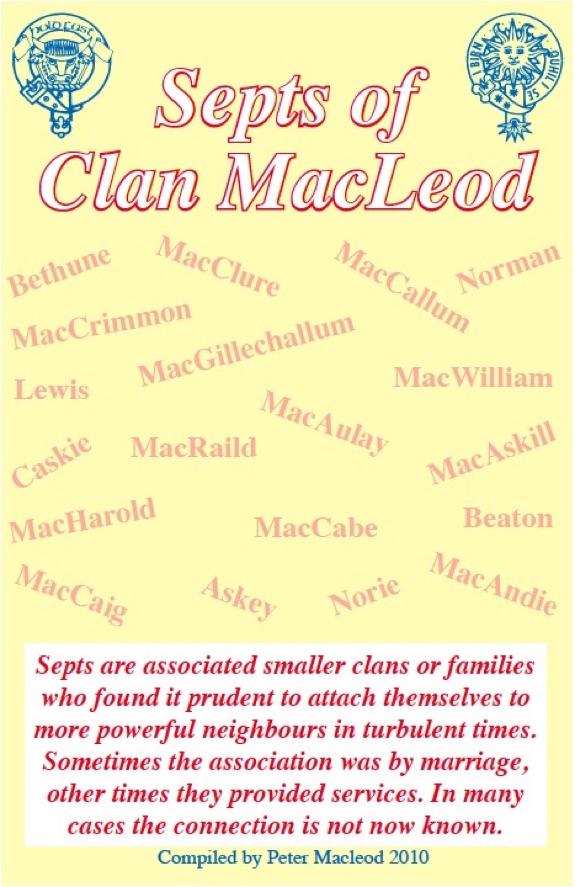 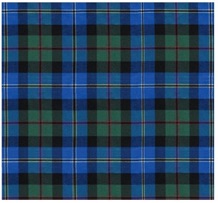 From History of Skye by Alexander Nicolson

A famous family noted for their services to Medicine and the Church. The name is mentioned in Skye as early as the fourteenth century when a certain John Bethune married Margaret, daughter of the second Chief of MacLeod. The first of the family mentioned as physicians was Peter who was physician to the MacDonalds and given a tract of land on the condition he trained a son to continue this service. The son chosen was Angus, Peter’s second son.

The skills were passed down, father to son until we come to Neil, great grandson of Angus, who was perhaps the most distinguished of the line. Neil lived in the latter sixteenth and early seventeenth centuries. He was said to be illiterate but possessed a wonderful knowledge of herbs and their medical properties which he could extract in a manner known only to himself. His skills were so great as both physician and surgeon that according to Martin Martin, his cures were “attributed to a compact with the devil.”

In the eighteenth century when qualified practitioners began to appear the Beatons/Bethune began to lose their prestige. They turned to other spheres of usefulness and the Church claimed many of them. Rev. John Bethune was minister of Bracadale where he died in 1708, he was described as “an able divine and a learned physician”. Rev. William Bethune served the parish of Duirinish and wrote the “Old Statistical Account” of that district in 1791. He was one of the ministers who so impressed Dr. Samuel Johnson, both by their learning and their lofty morality that he said he could not converse with them, “without wishing, as his respect, that they had not been Presbyterians”.

The Beatons were physicians to the Lords of the Isles and held lands in Islay, the seat of the old Lordship. After the Lordship was broken up, the Beatons scattered to enter the service of several Highland families: the Macleans of Duart, the MacLeods of Skye and MacDonalds of Sleat.

Yet other branches of Beatons became physicians to the Frasers of Lovat, Munros of Foulis and the old Earls of Sutherland. With the clan system prevailing in the Highlands and Islands at that time, no doubt the services of these physicians were made available to some clansmen as well as to the clan chiefs.

In 1305 a work called Lilium Medicinae was compiled by Bernard Gordon, a professor at the University of Montpelier. It became popular not only on the continent of Europe, but also in Scotland, for shortly after its appearance it was translated into Gaelic. Tradition has it that one copy of it cost of the Beatons of Skye no fewer than 60 milch cows and was so highly prized that when the doctor crossed an arm of the sea to visit a patient, the book was sent around by land.

Sept of the MacLeods of Lewis

Considered by some to be part of Clan Stewart.  Lewis is also a Welsh and

Lewis could be an anglised version of the gaelic Lughaidh derived from Lugh meaning brightness. Another possibility is that it is a place name adopted by some living on the Isle of Lewis (gaelic Leodhas).

Black in ‘The Surnames of Scotland’ says Andie is a curtailed form of MacAndie and is current in Argyllshire. He further states the name is a small sept in the island of Bernera, Sound of Harris and known as Clann ‘Ic Anndaidh or ‘Ic Anndai. He goes on to say the island name consists of only a few families and the name here is from the Old Norse personal name, Andi. In local folklore, the long tailed ducks are held to be enchanted MacAndies.

Dunain by Alisdair Roderick Murray, 1998. Some other sources also used.

The MacAskills are descended from Askill (Askel, Asketil), the last Norse Viking King of Dublin, who may have fled and taken refuge on the Isle of Man (probably beginning the enduring association between those who became MacLeods and those who became MacAskills). Most MacAskills who participated in a Y-chromosome DNA study are of Norse ancestry. The MacAskills were already in Skye when the Island came into the possession of Leod by marriage to a MacRailt heiress around 1230. When the MacLeod territories were divided between Tormod and Torquil, the MacAskills came under the jurisdiction of Siol Tormod, i.e., the MacLeods of Harris & Dunvegan.

Alanus MacKaskyll, a scribe in a monastery at Perth in the 16th century wrote:- “MacAskills were the lieutenants of the MacLeods, both by sea and land, from whom they held large territorial possessions in reward for their services as commanders of their galleys or birlinns, and one of them, clad in full armour, always accompanied the chief as his henchman.” One of the traditional posts held by the MacAskills was that of Constable of the main MacLeod stronghold in the South of the Island, the Castle of Dunscaith, they are said to have held it through several sieges although it was eventually lost to the MacDonalds.

The office of Lieutenant of the Coast at Rudh an Dunain was an hereditary one bestowed on the MacAskills and among the more dauntless of these lieutenants was Donald Dubh (Black) MacAskill. There was none in all the Isles more adept with the bow and arrow than Donald Dubh. One day he noticed a birlinn of the Clan Ranald in the Sound of Canna. As she approached Rudh an Dunain, Donald Dubh recognised it to be intent on plunder and manned by twelve stalwart MacDonalds. He quietly retired to the dun to collect an ample quiver, and then concealed himself behind a rock, from which he fired twelve arrows that killed the twelve rowers. Soon Clan Ranald’s birlinn came ashore and it was dashed to pieces against the very rocks at Rudh an Dunain that it had hoped to make in happier circumstances. Another tale concerns a Lieutenant of the Coast who was known throughout Skye as MacDhomhnuill Dubh, son of Black Donald. In pursuance of his duties this Lieutenant apprehended a man who formerly had been convicted of cattle lifting, fire raising and murder. The Son of Black Donald did not detain him long in captivity, but tried him on the spot. He decide to execute him, but before doing so he brought the prisoner to his own house and supplied him extravagantly with bread, cheese and whisky that he might thereby be the more able to endure his last moments on earth. Thereafter the Son of Black Donald marched his captive up a steep brae above the sea at Rudh an Dunain and beheaded him with his sword. The head rolled down the slope crying out as it rolled, ‘Faire, Faire, Mhic-Dhomhnuill Dubh! (Beware, Beware, O Son of Black Donald!).